The goal of this LoriotPro Plugin is to monitor network bridges and network switches running the Spanning Tree protocol. This algorithm defined in the IEEE 802.1d, is used to determine when multiple paths exist between two nodes which one should be active and which one should be in standby. This is necessary to avoid loop and broadcast packet storm.
Furthermore, the use of a dynamic protocol allows the network administrator to define backup path and thus improve network availability. Below two examples of Spanning Tree.

The Plugin through a graphical map performs the Monitoring. On this map, all devices behaving as bridge are represented. All ports and their state (blocking forwarding learning) are also represented.
Links (any kind of network) between bridge ports are also displayed.

Exemple of a network , Switches are green box, standby link are in red, active link are in green

The configuration is realized through a visual interface.

The Plug-In should be attach to one of your host of your Directory. It could anyway control all the bridge from the same Spanning Tree domain. Eihter attach it ot one of your switch/bridge or to the LoriotPro Icon 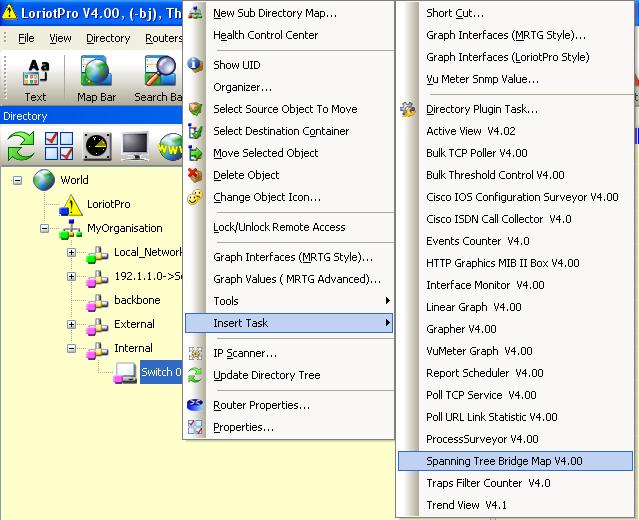 An alternative Way for Plug-in selection is to the Directory Plug-in task option of the menu which opens a PlugIn Loader box with explanations on each Plug-in.

The supervise window opened, you can now proceed to the next step : add bridges to the list.

You may do that in three ways:

To let LoriotPro discover the Bridges, press the Discover Bridge Devices from the Directory Button

Select the host to add and press Add Selection

The added bridges appears in the right pane of the Window named STP Instances.

From that point each Bridge in the list will be used by LoriotPro to create the Map.

The left buttons of the Pane allows yout to :

The topology change mainly occurs on the following events:

One of the bridge stop to work.
One the link (network) is broken.
You change parameter within the bridge (Path cost, priority, port status etc...)
A new bridge is added in the network.

On Cisco switch only, this Plug-in support Multi-Vlan. To select the VLAN specify it in the select box:

To explain the concept of the Spanning Tree we will use a concrete example.

We defines a network with three Ethernet Switches (working as multiport Bridge) that are connected together by Ethernet uplinks. Switches are considered here as Transparent Bridges and support the RFC1493.

The bridge uses its table as the basis for traffic forwarding. When a frame is received on one of the bridge's interfaces, the bridge looks up the frame's destination address in its internal table. If the table contains an association between the destination address and any of the bridge's ports aside from the one on which the frame was received, the frame is forwarded out the indicated port. If no association is found, the frame is flooded to all ports except the inbound port. Broadcasts and multicasts are also flooded in this way.

How the Spanning tree is created ?

In some cases, two or more bridges can have the same root path cost. In this case, the bridge identifiers are used again, this time to determine the designated bridges.

Cost of a port

We applied the Spanning Tree Algorithm to our network and we get the following results. All values are visible from MIB object that we will detail after.

The Monitoring of the spanning tree is performed directly from the Bridge Plugin.

The right pane of the window display all the bridge participating in the Spanning Tree and from there you could check the current status of each bridge.

In our example we get the following information for each bridge

The bridge Switch 1 is root, clearly identified by the earth icon.
We found next the following information :

Global parameter for this bridge

The MAC address of the Bridge

The bridge type defined by the MIB Object dot1dBaseType

The Bridge priority defined by the MIB Object dot1dStpPriority. The value is decimal but it is ofently defined in hexa (here 32768 = 0x8000).

Specific parameter for each port

The designated port defined by the MIB Object (dot1dStpPortDesignatedPort)Port name on the designated bridge identified from the MIB object :
(...mib-2(1).interfaces(2).iftable(2).ifentry(1).ifdescr(2))

We get the same information for the two other bridges

We could see here that the status of the second port of the Switch 3 is Blocking. This is the normal behavior of the Spanning tree, all the network are available and the best route from Switch 3 to switch 1 (The root) is by Switch 2. The total cost by this way is 20 against 100 by the direct link.
This is explained here by the link speed between 1-2 and 2-3 which are Ethernet 100 Mbps against cost 100 the 10 Mbps between 1-3.

On the MAP you could see the same status with color.

The color of the link and port have the following significance :

The management of the Spanning tree parameters could be done from the MAP menu. The commands sent from here are SNMP SET and thus knowing the write community of the bridge agent is necessary to perform them.

The menu provide the following option:

The Menu is divided in three sections:

Tools allow you to do a Ping, Telnet or Browse the MAP selected Bridge.

Next three options provides you with informations on the Bridge Device, list of ports, statistic on the Spanning tree protocol, STP timer values. Value in purple could be change.

The dot1dStpPriority could be change here to force a bridge to become root. The Bridge with the lowest value in a Spanning tree become root. In our exemple the Swicth 1 has value 0x8000 and is lower than swicth 2 (0x9000) and switch 3 (0xa000).

The timing value should not be changed or only if your are experimented. The modification of these values could for example decrease the convergence (tree reconfiguration).

Anyway, be careful when you change the values here.

The last five otpions give you Table contains of Spanning Tree information.

To see the significance of each table parameter, refers to the MIB Object dot1dStpPortEntry

The dot1dTpFdbTable stand for Transparent Protocol Forwarding DataBase entry and contains for each port of the Bridge (Switch here) the learned MAC addresses of your hosts.

The Bridge Plugin Support the IEEE 802.1d standard only. If you use switch and set one STP instance per VLAN you will not be able to see them except for the Cisco SWITCH.